Deciding our Top Social Media don’t was actually a really easy choice! This DON’T is something that I see numerous times per day but I am on a mission to try & eradicate! If you fancy helping me with this mission, please do share this blog post! 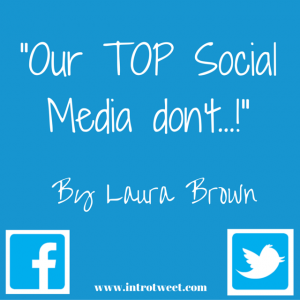 To begin with you may be thinking that this could actually be a very useful time saver & actually may have considered doing this yourself… OR you may be firmly in the Introtweet camp & also hate seeing these two accounts linked!

Either way, I am going to describe exactly why I am so against this & why I would advise ALL businesses who currently have their accounts linked to unlink immediately!

Here are my reasons;

*You alientate your followers – A Facebook post which has been linked to Twitter appears on Twitter as a very poor tweet! It may just be a Facebook link… or it will be an incomplete sentence followed by a Facebook link. Either way, this kind of tweet will never, ever gain any engagement on Twitter as it’s just not a good tweet! A tweet linked to Facebook will have no hashtags, no questions & will just disappear from the newsfeed in seconds. Instead of linking I would recommend taking the time to do the two posts seperately but making them both brilliant for their own seperate platform.

*You annoy your followers (or don’t gain very many in the first place) – Facebook posts appearing as tweets are hated by many keen Twitter users! A Twitter user is very rarely going to click the Facebook link in your tweet so actually your tweet is rather pointless…! Also, rather than just being a little bit of a waste they will actually have a negative impact on your Twitter use! If someone follows Introtweet & they have all their tweets linked to Facebook I really struggle to press the follow button – if this Twitter user is not actually using Twitter for Twitter what’s the point of following them as they will probably never engage with your tweets!

*Your followers probably won’t be the same on both accounts – whilst it’s nice to think all your Facebook likers are following you on Twitter & vice versa, in reality this just won’t be the case. You will have completely different audiences & they will expect your content to be unique & tailored to them! Don’t ruin your relationships before they have had a chance to begin…

* Lastly, it’s actually just quite lazy! I am sure ‘lazy’ is not a word that you would want associated with your business in any way – but by linking both of your accounts this is just how you will come across. Tailoring specific tweets to send out to your followers is what you need to begin to do – but to begin with turning your Facebook posts in to 140 character perfect tweets is a brilliant start!

What’s your opinion on linking Facebook & Twitter accounts? I would love to hear from you! (And if you spot do spot people linking… please politely share with them this blog!)

If you need any help unlinking your accounts please send us an email to hello@introtweet.com & we will get straight back to you!

Since 2013, Introtweet has been helping businesses around the world make the most of Social Media. To find out how we can help your business contact us.