Around the Bird TableIntroduction To Social MediaSocial Media NewsTwitter Guides 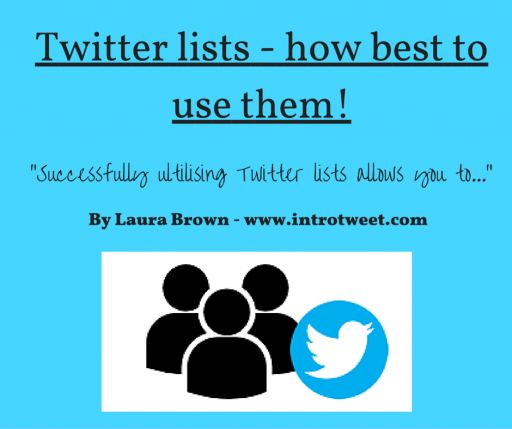 “A curated group of Twitter users. You can create your own lists or subscribe to lists created by others. Viewing a list timeline will show you a stream of Tweets from only the users on that list.”

Basically, a list is where you can segment your followers into groups to make it much easier to connect & engage with them! We use them ALL the time at Introtweet HQ & they make Twitter so much more valuable, easy to use & beneficial in seeing a ROI on your time spent on the platform!

Gone are the days of just tweeting at random times, tweeting random people & hoping for the best – it’s time to get your Twitter strategy on & start using Twitter lists!

Lists allow you to consistently engage with people & businesses that matter to you & your business! Add target clients to private lists, create a list for workshop attendees, add your clients to a list… the list is endless… & engage with them whenever you can! Daily engagement keeps you at the forefront of people who matter to you business; a little retweet or tweet in reply can go a long way!

Whether you are on your phone, laptop, commuting & need to just grab 5 minutes twitter time – lists make your life so MUCH easier! Instead of having to scroll through your homefeed to find people you want to engage with, you can just go straight to your lists & engage, retweet & tweet with purpose!

Whether you want to create just two or three highly valuable lists (public or private) or go list crazy, the choice is yours!

Be seen as an active tweeter!

The public lists you create appear on your profile next to your ‘likes’ figure – a high number of lists gives the impression that you are an active twitter user & therefore you are much more likely to be followed! If you then engage with this follower by adding them to one of your Twitter lists it makes them feel valued & part of your online community = this is (one of) the KEYS to not just Twitter success, but Social Media success in general!

Be seen as an expert!

You can use Twitter lists to become an ‘expert’ & ‘influencer’ in your field! Create lists to group key players in your industry (& engage with them daily), create a definitive list of Blogs/Magazines/Media attached to your industry, add all related businesses to a set list. Whichever lists you choose to create relevant to your business – become a leader! Engage with your lists consistently, retweet valuable content & demonstrate your knowledge!

*Try to engage with your lists daily. Whether you spend 5 minutes or 30 minutes, you never know where a Twitter conversation could lead you!

*Create a mixture of Private & Public lists. We understand some lists such as “Our target clients” or “Our competitors” may be a private list (depending on the nature of your business) but other lists you create should always be public, for many of the reasons above! Also, having your lists public means people can subscribe to your lists – further increasing your expert status & brand awareness via Twitter.

*Lastly, businesses who you add to lists get a notification saying they have been added (unless the list is private) so be careful with list names etc..!

Since 2013, Introtweet has been helping businesses around the world make the most of Social Media. To find out how we can help your business contact us.